For 15 years, I was a white woman who had dreads. This is the blog post that explains why that sentence carries weight and causes reaction. Dreads were a part of who I was for almost half my life and what many people visualize when they hear my name. Quite honestly, I’d already written four paragraphs about why I got the dreads, and how that decision came about, but then realized it wasn’t important. So to make a long explanation short: I got dreads. At the time, my hair was LONG so the dreads were all my own hair — no extensions or fake anything. I rocked them for almost 15 years. They gave me a courage that is hard to describe. Courage to rock different clothes. Courage to take risks. Courage to become who I felt on the inside.

I was at the height of my insecurity when I got dreadlocks; it bubbled over into every single part of my life. Before my dreads, I felt like a plain, chubby girl with a seriously cool rapper husband. I was often an invisible person with low self-esteem who felt people wondered how on earth I could have snagged a guy like Ryan. I had plain hair, and back then I never had the courage to make my hair a part of who I was. Let’s be honest: I probably didn’t really know who I was. So I got dreads and, looking back, they were a tool — knowing what I know now, I didn’t realize they were another culture’s tool that I borrowed, something I didn’t acknowledge or truly understand. As times changed, and society began to wake up, the climate that surrounded my hair choice started to change.

“If you’re going to take on something that does have sacred and historic significance and an unequal history of power dynamics, it’s important to honor that history,” she said. “Be an ally by knowing your stuff and being respectful and acknowledging where it comes from.” -Jamia Wilson

It started with a few select people in the music scene – who began to side step away from our family and friendship. Now I’m aware, looking back, that my dreads were the reason, but at the time – I had no clue. Then there were a few snide remarks, links posted without tags, but nothing to me. “Surely they couldn’t mean me?” I would think to myself. I wonder how I would have reacted to being sat down and talked to about the topic with one of those trusted friends. I truly had no idea of the appropriating or the frustration and anger I was causing.

All of these little things and moments had been in the back of my head, eating at me. So a year ago, I asked Ryan if he thought my dreads were offensive and if I should cut them. He adamantly stated that it was not the same and that mine were pagan and stemmed from that part of old witch culture. So I dropped it. Still, I had the nagging insecurity that people were offended or talking about them without talking to me. But, truthfully, Ryan had told me what I wanted to hear, so I quickly let it go.

Then about five months ago, I started getting obvious looks and comments from strangers in public — and one of my biggest fears is being humiliated in public. So I was pretty mortified. I’m sure most of the people around me at the time had no idea what was happening BUT I DID. I got eye rolls, snickers, audible sounds of disgust, and comments like “WOW, for real!?” or “That’s not right.” It was then that I knew the hair discussion had to be reopened and I needed to do equal parts research and soul-searching.

I consider myself a fairly forward-thinking, awakened individual on the topic of social and racial justice. I consider myself a white ally to the POC in my life. So how was my hairstyle choice affecting them? I wanted to know. I asked several friends and got the same response from all of them. “Well, we know why YOU have dreads and we know you didn’t mean it that way. Your intentions weren’t malicious, so you get a PASS. But most other white people with dreads are frustrating and triggering.”

With that, I felt it in my heart — a feeling of horror, of disgrace, of sadness. Oh my god, had I been everyone’s exception for all of these years? And if they were giving me a pass, that means I’d been offending everyone else in the meantime? Just the thought of that horrified me. I knew then, it was time to make a change.

The thought of cutting my dreads TERRIFIED me. I went to Ryan, just like I had almost exactly a year before, to get his opinion, thinking he would repeat the same thing he had a year earlier. He didn’t. Instead, he looked at me and said, “It’s time. The world is a much different place than it was 15 years ago; we know more, we are more sensitive, and if we are going to stand as allies it also means we have to make choices as allies.” I trust this man’s opinion on all political and racial matters with my life, so I knew he was right. I legit cried for two hours, but I knew that the choice to cut them and why totally outweighed my anxiety for whatever was under the 86 dreads that had lived on my head for over a decade.

I need to touch on that, because as a mother – this part was important. My insecurities were out in full force. I shared my fears with our daughter. I told her that I was frightened of finding out what was underneath, that maybe the fierce woman I had grown into over the years was because of the hairstyle. Maybe they were my style and strength and not anything else inside of me. I was so scared to go back to who I was 15 years earlier. My daughter saw the fear in my eyes and I think it was shocking to see. The strong mother who had gotten her through so much was crumbling over some hair. She looked at me and said, “Let’s pick out a haircut that you can totally rock. It’s going to be fine – just please don’t bleach it.”

“Never mind searching for who you are. Search for the person you aspire to be.” ~Robert Brault 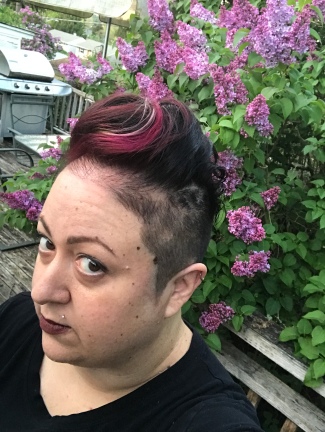 With the help of a few key close friends, several text conversations that consisted of me flipping out and them reminding me to stay calm and breathe, the decision was cemented and new style was picked. I found a stylist through a friend that specialized in the emotional side of big hair changes, and I took the plunge. I was determined and had made the choice, so there were no tears and no freak outs. I knew it was about something bigger. I knew I was taking steps to being a better ally and a better example to the other people around me trying to do the same.

I need to dig into the reason for the change. This needs to be discussed because it is about society and their tendency to want to whitesplain things that have cultural and racial undertones. Sure, if you are trying to find reasons and excuses on the side favoring dreadlocks on white people, they are definitely there. I’ve had discussions with white people about it and have gotten the same comments.

“Everyone takes looks from other cultures!”
“What about St Patty’s Day?”
“But Cinco De Mayo!?”

Even writer Feminista Jones was quoted in an article on the subject once and stated, “My research informed me that Indian monks wore them long before they reached the Western Hemisphere, so I’m not sure anyone has any particular claim.” If you LOOK for reasons and excuses in history, you will find them. Maybe they did not ORIGINATE in any one culture. Maybe they can be found in many races throughout history. That is not the point here.

In my research, here is what I found: Dreadlocks, for the marginalized cultures, was a symbol of resistance against signs and actions of colonization and expectations of assimilation. It was their form of a voice, of power, of freedom, so to speak. Your St. Patty’s Day drinking isn’t taking from a marginalized culture that our country spent hundreds of years enslaving. Appropriation means taking from a culture that has created a style or art that was used as a tool to assist them out of their oppression, and adopting it as your own. Using it either for social clout or as a symbol of hip coolness or even worse, for profit.

In our current political climate, I often hear from people asking how they can be better allies. They want to know how they can get WOKE and how they can help fight alongside their friends that are being targeted and oppressed. I think every one of us being aware — taking a look at our lives, at how we conduct ourselves, and how we are portraying ourselves to both the world and our children — is an important step. I excused my dreads for years because (at the time) I didn’t know better and I was given a pass by my community (at the time). In reality, if I am going to continue to teach my daughter to be a voice of justice to the privileged community around her, I need to make decisions that reflect that. We all need to be more conscious of how we live and sensitive to how our actions (or inactions) may be affecting people around us.

This post is not meant to judge the choices or journeys of others. It is not meant to start an argument on who is right or who is wrong. I will not entertain discussion around why I may be wrong in attempts to aid in anyone’s white fragility. It is meant to share my process, my lightbulb moment, my growth and journey, and how it has shaped me into who I am today. All of the missteps and mistakes I have made in my 42 years on this planet are part of who I am today. I would not take any one of them back, but I would not want to stay stuck in them, either. Life experience helps us make better choices and learn how to move forward. It is my hope that this piece will help start meaningful and powerful discussions in your own circles, so you can reflect on the things you can do or change in your own lives to become better allies.

It feels good knowing I took one very small step in making myself less of the problem and closer to being part of the solution.